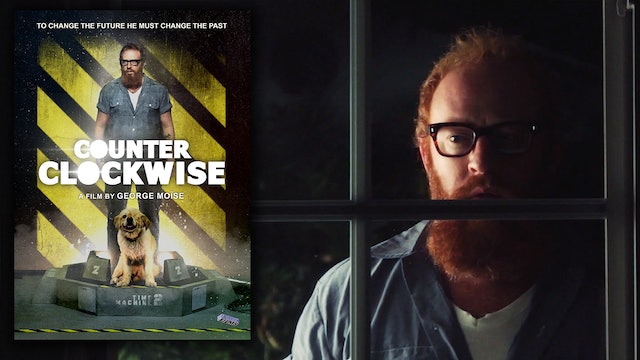 By inventively merging mind-bending science fiction with dark comedy, COUNTER CLOCKWISE delivers a hugely entertaining thriller about a befuddled time travelling scientist caught up in a murder mystery. Bearded scientist Ethan Walker is obsessively working on inventing a tele-transportation device. Instead he stumbles into inventing a time machine and recklessly zaps himself six months into the future. Ethen finds that the future has taken a sinister tone as men are out to kill him and the police are looking for him for the murder of his sister and wife. He now needs to try to return to the point right before everything went wrong and solve the mysteries. Easier said than done. An inventive, head-scratching, fast-paced American Indie time-travelling gem. Comedy, Sci-Fi, Thriller.

“…in the tradition of 12 MONKEYS and DONNIE DARKO…it may take a few repeat viewings – and even a few DIY charts on scrap paper – to begin to understand the deliberately convoluted narrative. Also check out the making-of extras and commentaries on the Artsploitation DVD release.” – ClevelandMovieBlog

“Dark humor with a nice mix of science fiction and thriller story telling….Time travel movies are always going to be a hit and even more so if they are done smartly like Counter Clockwise is.” – HorrorScreamsVideoVault

“Writer/director/producer/editor/cinematographer George Moise deserves a lot of credit for concocting a time-travel thriller which keeps upending expectations at every turn. Sure, Counter Clockwise eventually slips off the rails but for a good long while it keeps you intrigued with the saga of a scientist (Michael Kopelow) who sends himself six months into the future. Trouble arises when he discovers that his future self is wanted for murdering both his wife and sister. Even though it grows too complicated – and the ending turns unspeakably nasty – there’s enough invention here to impress even the most hardcore sci-fi fan. ” – Amy Longsdorf, TicketToEntertainment

About the Director: George grew up in Atlanta, GA in a family of six. He studied in Paris and then attended NYU’s undergraduate film program where he acted in almost a hundred short films and directed many classics still beloved to this day. While still in New York he formed the legendary sketch comedy group “Fat Camp” in NY. Then he moved to LA and made the acclaimed short film “Out,” which played in numerous festivals all over the country including the LA Shorts Fest, the Atlanta Film Festival, and the Beverly Hills Film Festival. He went on to write and direct the now famous short film, “The List,” which also screened at film festivals all over the world.

George was a freelance writer for Cinefex magazine and has worked with Christiean Audiger, Red Bull, Disney, and directed videos for Ebay. Counter-Clockwise marks his directorial debut. — IMDb Mini Biography By: Elvis Mitchell