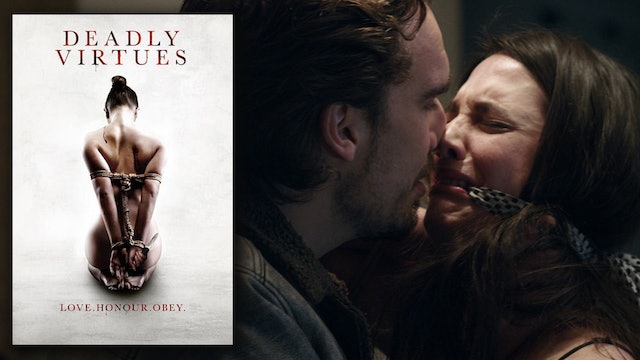 Over the course of a weekend, a hypnotic home invader explores and exploits the relationship of a suburban, middle class couple. His brutal torture of the husband and seduction of the wife uncovers an uncomfortable truth about their marriage and ultimately acts as a catalyst for extreme liberation. Drama, Thriller, International.

“So what did I think the first time I laid eyes on the promo material for Deadly Virtues? A shitty lifetime channel melodrama dressed in horror garb. And what did I get after actually watching Deadly Virtues? A trashy – yet entertaining – lifetime channel melodrama dressed in horror garb. [A] guilty pleasure…well acted (Megan Maczko in particular, puts on a great performance) …give it a shot, you may find yourself surprised to be smiling by the time the credits roll.” – 13thFloor

“Don’t head into Deadly Virtues: Love. Honor. Obey anticipating a Steven Spielberg level film. Instead, load this one up knowing that the budget is limited but the heart is enormous, and everyone involved in the picture showcase a drive that tells me no one was sleeping on the job. This gang wanted to make a disturbing, creepy little picture, and they’ve succeeded.” – AddictedToHorrorMovies

About the Director: Writer, director and producer Ate de Jong was born in 1953 in the Netherlands. He studied at the Film Academy of Amsterdam, studied philosophy and worked as a print journalist until he got his first film job driving a prop van. But he quickly rise up the ranks to directing several Dutch features. In 1986 Hollywood beckoned where his first directing assignment was an episode of “Miami Vice” (starring Don Johnson, Philip Michael Thomas, James Brown and Chris Rock). He followed that up by directing two US feature films: Highway to Hell (starring Chad Lowe, Kristy Swanson, Gilbert Gotfried and Ben Stiller) and Drop Dead Fred (starring Rik Mayall, Phoebe Cates, Carrie Fisher, Marsha Mason and Bridget Fonda).

He also directed All Men Are Mortal (starring Stephen Rea, Irene Jacob, Chiara Mastroianni and Marianne Saegebrecht) based on the book of Simone de Beauvoir and the sexy thriller Fogbound (starring Luke Perry and Ben Daniels). He produced Left Luggage (Isabella Rossellini and Maximilian Schell) and The Discovery Of Heaven (Stephen Fry). Since moving back to Amsterdam in 2008 Ate de Jong has become involved in the Dutch Filmfund and acting director of The Binger Filmlab. De Jong also created a radio show for NPR (National Public Radio, has written several novels and a party-games book for children.