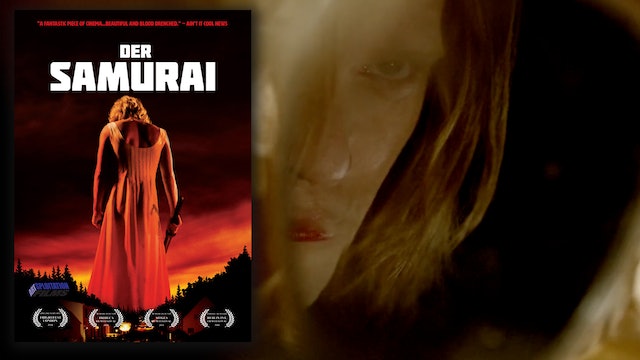 Unlike any other horror film you’ll see this year, DER SAMURAI is a German mind-bender about shape-shifting cross-dressers, bloody decapitations, repressed sexual desires and small town life. But while director Till Kleinert’s film is a surreal mix of dark comedy and eerie creep-out that recalls David Lynch. Jakob is a policeman in a village deep in the woods, where little happens until the arrival of a mysterious wolf that is causing havoc. Working the night shift, Jakob is tracking the wolf…only to discover that the lupine lurker is actually a man clad only in lipstick and a ladies’ slip, and toting a samurai sword that he uses to lop off the heads of the townspeople, including Jakob’s tormentors. Jakob and the transvestite samurai seem to share a bond, and as the night gets darker, events get even weirder. Completely bizarre yet wildly entertaining. Fantasy, Horror, Thriller, International.

“A lot of different interpretations are going to be reached about the film, which is one of the reasons it’s so damn exciting.” – Bloody-Disgusting.com

“The opening scenes of DER SAMURAI carry that pleasurable feeling that can be hard to come by on the current horror scene: The sense of not knowing at all where the story’s going, but that the filmmaker knows just what he’s doing.” – Fangoria

“DER SAMURAI is the type of film I live for: well made and weird.” – TwitchFilm.com

About the Director: Till Kleinert was born in 1980 in Berlin. In his youth, he drew comics and made videos and stop-motion films. Later, after civilian service in 2001, he interned at the Volksbühne Berlin Theatre and for a short time was a sausage vendor. He studied at the German Film and Television Academy Berlin from 2004-2014, graduating with DER SAMURAI. His other award-winning films include the shorts: Dog Food (Hundefutter, 2007), Cowboy (2008), Cocoon (Kokon, 2009) and Boys Village (2011). Since 2005 he is part of the filmmaker’s collective Schattenkante.