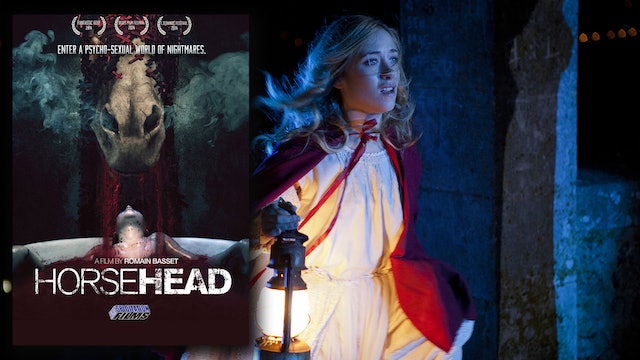 Haunting and horrific, surreal and shocking, HORSEHEAD is a new horror-fantasy that pays tribute to the classic European shockers of Dario Argento and Mario Bava while also remaining a unique film with its own vision, delivering unforgettable images that both disturb and enchant. Director Romain Basset’s tale follows beautiful young Jessica (Lilly-Fleur Pointeaux) as she returns to her family’s countryside estate for her grandmother’s funeral. Haunted by recurring nightmares of a horse-headed monster, Jessica attempts to put her studies of “lucid dreaming” to good use, as she semi-consciously navigates through this dream landscape, trying to discover the secrets behind this sinister apparition. But Jessica must also cope with a hostile mother (The Beyond‘s Catriona MacColl), and the growing realization that the death of her grandmother was actually a suicide triggered by the woman’s past traumas and visions. HORSEHEAD is a feverish, ethereal journey through the world of nightmares. Fantasy, Horror.

“The nightmarish and surreal imagery at play in Horsehead is breathtaking to witness.”
– Ain’t It Cool News

“Beautifully shot, loaded to the gills with rich color and imagery and full of subtext that is both steeped in traditional metaphor and great nods to gothic storytelling.” – Famous Monsters

“Great visuals, haunting soundtrack and dread by the fistfuls… Horsehead is a movie horror fans should be proud of.” – Geek Chic Elite

About the Director: Born in 1983, Romain Basset has directed short films Bloody Current Exchange (2007) and Projection (2006) and experimental videos, all of which played in film festivals around the world. Horsehead marks his feature film directorial debut.